Home Uncategorized Do you think I am an idiot? Who uses those passwords?

Do you think I am an idiot? Who uses those passwords?

I use a plugin on this site that tracks hack attempts and I just checked it and there were some odd attempts.

I laugh at these people and their lame attempts at hacking my site. Here is an example of a password that I use: G8!5TB2Kdbnru3n#[email protected]
That is 24 characters using CAPS, lowercase, numbers, and symbols. 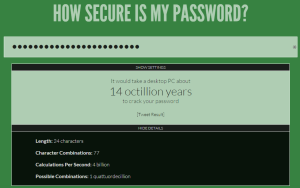 From howsecureismypassword.net you can see it would take 14 OCTILLION YEARS to crack at 4 million per second!

I started using LastPass a while ago and it has changed how I now use passwords. I am constantly auditing myself on what passwords I use and often change from an older password to one as seen above. I just think it’s funny what people try as possibly passwords for my site. I also work in IT so I know how silly and too often simple passwords are, for most people. It’s no wonder the amount of data that stolen just by simple passwords.

I know it is sometimes a pain to have a difficult password but it could be the difference between thinking you have information store safe and secure and identity theft. Think about it, and take note. The best thing you can do is NOT use the same password for two different sites. Yes, I know it’s easier. But so is it for the bad guys. If they get an email and password for one account you better believe they will try it on another account.