Home Archive by category "My Story"

I am creating this template to start writing will will eventually be an autobiography. The purpose of this will be to eventually publish, probably self publish. I would like to leave a legacy for my kids and grand kids to be able to read about my life and things I remember about my childhood and everything that leads up to today (or at the time of the writing). I will try to be as brutally honest as I can and will try not to won’t worry about embarrassments along the way. Follow this and the other post to read along as I post new. https://jasonlamb.me/blog/cat/my-story/

I plan to write a little bit as often as I can instead of large chunks that will take me long to write. This way I can keep moving. I will write in a stream of conciseness and then organize it later chronologically or some way that makes sense.

I hope you enjoy and feel free to leave comments for suggestions or memories or anything I can add or make better. 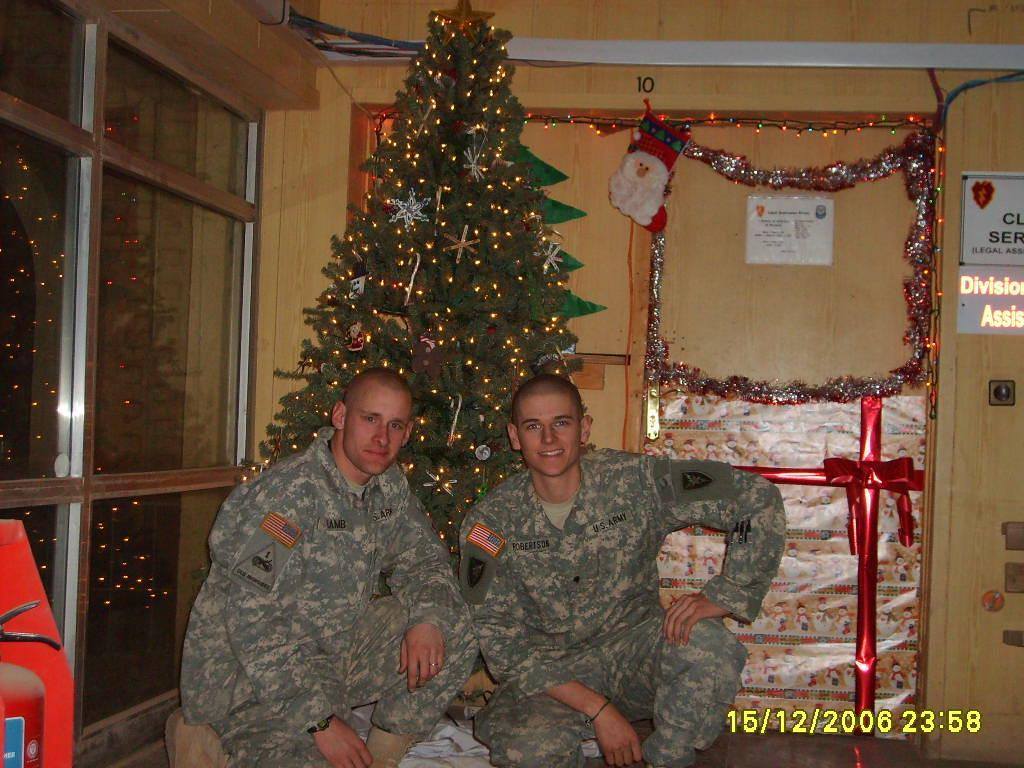 It was a dreadful August morning in 2006, I was running late to formation at 0900. The night prior was obviously filed with a little too many libations. There was no morning PT so just a 0900 (9am) formation to start off the day. I reeked so bad of B.O and alcohol that I had to find some time to take a shower because in the rush of waking up I had no time before running out the door. I met my Platoon Sergeant who introduced me to a new soldier to our company. He was a 25F just like myself. 25F is the job classification for Network Switching Systems Operator/Maintainer. The new soldier had just finished his first duty station at Fort Bragg, NC. He was airborne qualified and very anxious to start his new duty station in his home state of Texas. I, having a wonderful night before, was his squad leader and as such was to show him around and get him situated. I was not feeling like doing that. It wasn’t one of my best morning. I didn’t make a good first impression to a new soldier to the unit. He became known as Leb, and will be referred to as such for this story.

I got to know Leb very well as we instantly hit it off as friends. We had similar interest in technology and movies. He was tall and lanky and had a very dark sense of humor; very sarcastic at times. He also had similar taste in women so we had plenty to talk about.

About 2 days before our whole unit was to deploy I woke up with a softball size welt on my neck. I didn’t know how big it was when I woke up until everyone in PT told me I need to go to medical right away. I was excused to the doctor so I went to have it checked out. As soon as I got there they had a look and told me to go to the ER to have it checked. I got to ER and they immediately took me to have a CS scan. It could have been an MRI, I don’t recall exactly. I just know it didn’t hurt but I could feel it. I was in the ER for a few hours awaiting results and treatment. They sat me down to have a chat and told me I needed my tonsils and adenoids removed. I said, “Sure, let’s do it!”. They said come back in two days for the surgery. I said that can’t happen because I am deploying with my unit in two days. They said, “No, your not.” I was devestated! I went back to tell me guys and I instantly felt like a lame-o. I was being put on Rear-D…Only profile and scum bags go on Rear-D. 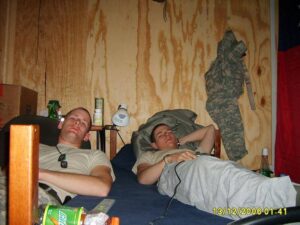 Rear-D stands for Rear Detachment. It is the left over soldiers who are either delayed in deployment or won’t deploy at all. A handful of them were scheduled to ETS from the Army within a month. They and were exempt from deployment, but most were back because of some lame excuse for why they didn’t want to deploy and found some loop in the system to “award” them of that shameful status. If you are a soldier, it is your primary job to deploy during a time of war. You are looked down on if for what ever reason you don’t. I digress.
I got to sit back and watch my unit load on the buses head for the airport with all their gear to ship out to Iraq. It was a horrible feeling. All my personal items were already loaded in storage, all my gear was already on its way to Iraq. I had a few uniforms, some “civies” (civilian clothes), and toiletries. The next day after they deployed I had my surgery which gave me 30 days of convalescent leave, the first 14 days were quarters. I could do nothing except stay in my room and go to the DFAC (dining facility) for the first 2 weeks. That was the plan anyway. What actually happened is for another story. 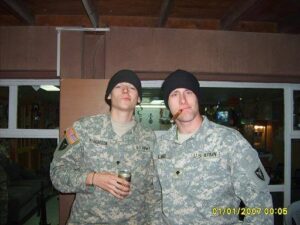 A month after my unit deployed I was cleared for deployment. I shipped out with 4 other soldiers and made way to Iraq. Once I arrived at about 11pm I was greeted by Leb and my Platoon Sergeant. It was great to be with everyone again! Over the course of that year Leb and I setup a wireless network with two static IP schemes. We also bought and setup a satellite to give our unit internet access. One IP scheme was to allow the local connection of XBox’s to play very broad Halo multiplayer battles. The other IP scheme was highly secured and monitored network of users who paid a monthly premium to use the internet. I won’t take most of the glory in this. I assisted Leb in the setup of this. Now that I think of it, it might have been wired, not wireless. None the less, it enabled us to have some fun on our down time and communicate with the outside world form the comfort of our wooden shack.

Leb and I spent many long days and nights watching the whole show from season 1 to 10 of Stargate SG1 along with other shows. We alternated on guard duty and spent much time talking about home. We would talk for hours. He became my closest confidant in Iraq. I opened up to him about many close things in my relationship back home and I helped him through rough times as well. He was the Bubba to my Gump.

“Bubba was my best good friend. And even I know that ain’t something you can find just around the corner.”
-Forrest Gump (1994) 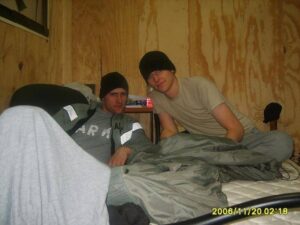 After 13 months overseas our mission was over and we came home. I was only in Texas for the next 3 months as I was getting all my appointments lined up to exit the Army. I saw Leb, and the rest of the unit, a little here and there but mostly had to attend briefings and appointments to ETS (Expiration of Term of Service).

I did see him a few years later when he came up for a visit to Ohio from Virginia. His time in the active Army ended and he started a job working on oil rigs as an IT guy, yes that actually exist. He didn’t like the travel so much and then went to working for a telecom provider in Virgina before moving back to Texas. He is still in the Army Reserves as a 25F and also used his GI Bill to become a certified helicopter pilot. 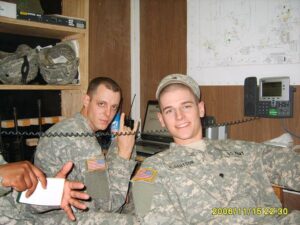 We have had several conversations over the years since I left Fort Hood. He is one of the close few friends whom I miss from my Army days. I wish you well in your engagement, Battle Buddy. Although we only knew each other in person for about 18 months, you will always be in my mind when I think about my time in the Army. I hope to hang out some day again. I am glad you are so close to Chris. Both of you are great guys. Thank you both being great friends. I miss you both!

All of that to say this; sometimes your closest friends are the one you spent the least amount of time with because that time was spent so well. I have known many people for a lot longer time and wouldn’t consider them as close of friends as I am with Leb. Much of my time in the Army was like that. Get to know your comrads in a quick and close environment and then things happen and you may never see them again, but you remember.

You can check out my old website for more pictures – icwnow.com/iraq 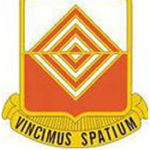